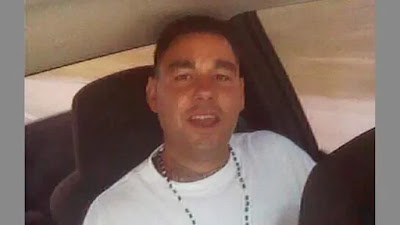 Thirty-two-year-old Eric Alvarado was last seen on his home security cameras in the early morning hours of November 20, 2018, in Atlanta, Texas. According to Atlanta police, he left his home to run to the store. Eric had his two pit bulls with him at the time. He never returned.

Lorenzo is a single parent of three. At 6’7” Eric is “just like a big old bear,” Lorenzo said, describing his middle child. He also “has a great big heart” and would “do anything for anybody,” Lorenzo added. “Give the shirt off his back, give you his last dollar.” He told Dateline that Eric is a talented tattoo artist who planned on opening his own tattoo shop in East Texas. “He went to art school in Dallas and had a full scholarship for that,” Lorenzo said. “He just loved art and he got into tattooing. He loved doing that.”

Eric’s older brother, Matt Alvarado, also spoke with Dateline. Both he and his father say Eric was acting strangely right before he disappeared. Dateline reached out to Samantha Alvarado for her recollection of her husband’s behavior in the days leading up to his disappearance, but has not yet heard back. She did speak with NBC Affiliate KTAL in 2019, and described the day Eric disappeared, saying that after Eric left, “the front door was wide open, the screen door was wide open, the dogs were gone, he was gone, the Jeep was gone.” She also noted that Eric left the house without his cell phone. “We just want him home,” she said.

Captain Greg Restelle of the Atlanta Police Department told Dateline that Arkansas State Police found Eric’s Jeep later that morning, November 20, about 50 miles away from his home, on Highway 71 in Little River County, Arkansas. Captain Restelle said he believes the Arkansas Police processed Eric’s Jeep and then returned it to the registered owner, Eric’s wife, Samantha. KTAL spoke with Atlanta Police Chief Robin Betts in 2019 about Eric’s case, who said, “They found, I think, a shoe, and some keys that were on a fence that actually belong to him.”

Captain Restelle and Detective Sergeant Jeb Newkirk, also of the Atlanta Police Department, told Dateline earlier this month that there are currently no suspects in Eric’s disappearance. “We've interviewed everyone that's been called in or we’ve received a tip on, or received information about,” Captain Restelle said. “And nothing that we can move forward with or substantiate has been developed out of any of that.”

Matt Alvarado told Dateline that as soon as he heard about his brother’s disappearance, he rounded up a few of his cousins in Indianapolis and headed down to East Texas to help search for Eric. Matt said they arrived in the early morning hours of November 21, 2018. The first thing Matt said he wanted to see was his brother’s phone. According to Matt, Samantha told him that she had tried to unlock Eric’s phone too many times, which caused it to reset itself. Captain Restelle told Dateline that while he wasn’t involved in the case at the time, he believes that the Texas Rangers received Eric’s cell phone. Eric’s family said they haven’t heard if any data was recovered.

Matt said he and his cousins went to the area where the Jeep had been found to search for evidence on their own a couple of days later and found Eric’s two pit bulls dead nearby. “They looked like they’d been run over and all that,” Matt said, adding that they also “looked like they'd been shot -- cut up.” Neither Capt. Restelle nor Det. Sgt. Newkirk personally went to the scene, but Capt. Restelle said he was told by officers who no longer work at the APD that it looked as if the dogs had been run over by vehicles. When Dateline asked if any DNA has been recovered during the investigation, Det. Newkirk replied, “As far as any kind of DNA evidence that we've recovered at any point during the investigation, no.”

The Alvarado family is desperate for answers. “For me, you know, my son was a good kid. He didn't deserve what's going on,” Lorenzo said. “Our biggest problem,” Lorenzo said, “is that we can't get a private detective, because we can't afford it.”

Lorenzo told Dateline that he is thankful for the help he has received from the community, specifically local Indianapolis journalist Kathy Crisp, and his friend Melissa Vaughn, who have been looking into Eric’s disappearance. Dateline spoke with both women regarding Eric’s case. We've been told that [Eric] was kind of acting a little different kind of, like, nervous,“ Kathy said. “And a lot of the people that were at that house that night said that he acted -- was paranoid.”

Kathy and Melissa told Dateline that they have reached out to as many potentially involved parties as they can, but said they have faced difficulties. The women told Dateline that strange things have happened since they got involved in Eric's case. Melissa said she has received late night phone calls where the caller just breathes heavily and hangs up. “I think we're being warned because we're getting too close,” she told Dateline. Captain Restelle told Dateline that no one has reported anything to the Atlanta, Texas Police Department about being threatened. And while Kathy and Melissa are dedicated to helping find justice for Eric, “We're running out of options,” Kathy said. “We need somebody to come in and investigate.”

Detective Sergeant Newkirk told Dateline that while there haven’t been any solid leads in the case, someone in Eric’s family submitted a DNA sample through the National Center for Missing and Exploited People. “That way a familial DNA specimen would be on file or on record,” he said. “That way if DNA did come up somewhere, it could possibly lead to a familial match and the possible ability to identify Eric.”

As a father, Lorenzo told Dateline his heart aches over his son’s disappearance. “I dream about my son, you know? And then I wake up and I know he's not there,” Lorenzo said. “We lost 14 family members during COVID, and my father passed away years back. I haven't even had time to mourn him. I don't know how to, because my mind is still stuck on my son.”

The family just wants closure and justice for Eric. “He's the heartbeat of our -- of our family because he was such a clown, making everyone happy,” Lorenzo said. “He was just totally there for all of us.”

Lorenzo told Dateline he has set up a $10,000 reward fund for answers in Eric’s disappearance. “I would sell anything and everything to get that reward to somebody,” he said.

Eric is 6’7”, with black hair and brown eyes. His nickname is “Slow.” According to the family, he has numerous identifying tattoos: the words "Spanish Blood" on his neck, a large cross on his back between his shoulder blades, his last name "ALVARADO" above his navel, the name "LORENZO" around his wrist, and numerous other tattoos on his chest, neck, both arms and both hands. He would be 36 years old today.

If anyone has any information in regards to Eric’s disappearance, please contact the Atlanta, Texas Police Department at (903) 796-7973.

Email ThisBlogThis!Share to TwitterShare to FacebookShare to Pinterest
Labels: News